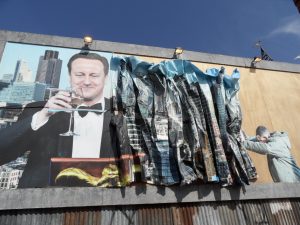 Cameron has removed himself from the picture, but Labour seems not up to filling the blank

Like many on the left, I was happy for Jeremy Corbyn to become Labour leader. This seems now, unfortunately, a terrible error of judgement. Corbyn and his shadow chancellor John McDonnell have confirmed that they will not attempt to reverse the referendum result. Instead they seem to be aligning with the Conservatives in prioritising the British national interest, while ignoring the wishes of their many young supporters for a post-nationalist world.

The Labour party leadership supported the Remain campaign. Many accused Corbyn to be lukewarm in his support and he confirmed as much. Many Blairites among Labour MPs and in the party think that Corbyn did too little. There is now a full fledged rebellion against Corbyn/McDonnell among Labour party members of parliament. One cannot seriously be symphathetic to the motives of some of those who now demand Corbyn’s head. Throwing the Labour party into an internal power struggle in the middle of a massice crisis of Conservative politics seems absurd. And yet, Corbyn/McDonnell have significantly contributed to the Labour crisis in their post-referendum moves.

In the first days after the referendum I was ready to give Corbyn/McDonnell the benefit of the doubt. Like many I just did not really expect for this vote to go the way it went. British leftist, I believed, and the many more decent people in the country, would recoil in horror from a ‘Leave’ campaign that argued with blatant lies and deceit, with barely concealed racism, culminating, lest we forget, in the racist murder of pro-European MP Jo Cox.

But many Left Brexit (or ‘Lexit’) supporters carried on more or less regardless. What were their motivations? Labour MP John Mann put it most pointedly:

“My opposition from the very beginning has been on the lines that fighting capitalism state-by-state is hard enough. It’s even harder when you’re fighting it on the basis of eight states, 10 states and now 28.”

Mann added he was not a racist, nor were his constituents.

Two weeks after the vote, the number of racist incidents in Britain has skyrocketed and it feels like the next right wing murder is now only a matter of time. You would hope that this outcome would open the eyes of Lexit supporters, but there are few that have confirmed they regret their decision.

What is worse, John McDonnell has confirmed the nationalist approach expressed by John Mann and also clarified what ‘fighting capitalism in one state’ actually means.

‘the single market is to end, but freedom of movement is to be defended in post-Brexit negotiations’

You wish! McDonnell said the exact opposite:

‘Let’s be absolutely clear on the immigration issue. If Britain leaves the European Union, the free movement of people, of labour, will then come to an end.’

McDonnell added that single market access for Britain is to be retained, and the ‘passport’ of London banks, that allows them to trade in the EU, is to be defended.

If this sounds like the mainstream Conservative position to you, you might be excused. Would we not expect from a left wing party to defend freedom of movement? Would we not expect that this matters more to a left wing party than access of international banks to the EU single market? Would we not, at the very least, expect Labour to ridicule the Conservative fantasy that the EU will allow full access to the single market without ‘freedom of movement’.

The horseshoe theory describes what some consider the overlaps between radical right wing and left wing positions. It often points to a joint rejection of democracy by the radical right and the radical left. But the rejection of democracy is perhaps a symptom, but certainly not the cause of right and left wing convergence. Its prime cause is nationalism.

The Syriza government of Greece is a typical example. When they first came to power in January 2015, Syriza needed a coalition partner. Instead of choosing a party of the left (there were three options: The Greek communists, the pro-European POTAMI and social-democratic PASOK) they choose to form a coalition with the right wing populist and anti-migrant ANEL. This coalition is still in power. What unites these two parties? Contrary to the arguments made by some proponents of the horseshoe theory, it is not their rejection of democracy. It is their joint Greek nationalism. This is most evident in the Greek government’s reluctance to attack Greek elites and their continuous tax evasion. Essentially nationalist feeling are exploited to enable the continuation of the capitalist status quo, in which local elites are able to retain their privilege.

In Britain something very similar is to happen, should the Brexit vote stand: McDonnell has confirmed that local capitalist elites matter more than international workers. Those working in this country, whether British or migrant, will continue to see their benefits and social services cut in order to stabilize the post-Brexit economy. The added difference is that many migrants will loose some of their rights, making it easier for British businesses to push down wages for everyone. Conveniently British and migrant workers will be increasingly antagonistic to each other, and the resurgent racism will make it more difficult to form alliances among them.

The only way to prevent this terrible development is for all progressive forces to fight to reverse the referendum result. The Greens have now joined the call for this important and potentially game changing project. But Corbyn/McDonnell are refusing to do so.

The nominal internationalism of the old left

Many have pointed to the centrality of age in the voting outcome. People under 45 years old overwhelmingly voted to remain, while those older voted to leave. But why did age play such an important role? Perhaps it is the lived post-national experience of many younger Brits. Perhaps lacking such an experience, Corbyn and McDonnell, along with many more old Lexiters, are caught up in what can only be described as British nationalism. British nationalism seems paradox, because commonly Britain is not considered a nation, but a union of nations. But it seems this apparent paradox makes British nationalism somewhat more acceptable, particularily in the left.

While nominally internationalist, and in permanent symbolic support of workers in other countries, a thoroughly British lens dominates the old left’s political worldview. What it often lacks, despite countless political travels and gestures of international solidarity, is a material experience of post-nationalism. In contrast, many people under 45 share a sense of post-national political outlook, because they have worked and lived in countries other than the one they were born in, or simply because they do not like to be tied down to one nationality.

The lack of a post-nationalist outlook on the left leads to viewing the world as a replica version of British politics, or rather in the continued British imperialist perspective, even if it is of course reversed to anti-imperialism. The Israeli-Palestinian conflict, for example, is often read as if Israel was an incarnation of British imperialism, a British establishment colony of sorts. Accordingly the Palestinians are seen as equivalent to the British working class. Thus for the old British left, the Israelis are always wrong and the Palestinians always right, leading to terrible errors of judgements, as the recent Anti-Semitism row in the labour party has shown vividly.

Similar distorted the view on the Greek crisis: the EU is seen as establishment, a version of the British Empire, while the Greeks are collectively victim of a colonial assault. The inability and unwillingness of the left Greek government to go after their own tax-evading elites: ignored. The fact that Greece’ GDP is still higher than it was before Greece joined the Euro: irrelevant. The Greeks’ ability to move to other EU countries, including Britain, with full rights: dispensable!

Most dangerous is the distorted British nationalism of the left, when it claims that capitalism can be fought one country at the time. Do McDonnell and Corbyn seriously think that their core voters appreciate their attempt to copy Conservative and UKIP positions? Once nationalism is accepted as the only game in town, voters will opt for the original.

In contrast to the nominal internationalism of the old left, there exists a very different experience and outlook for many British people. Those Scottish and Irish Brits who voted to remain in the EU did so, because they want to be more than British. Many Brits, including many English and Welch have deliberately left behind the UK and decided to love, live and work post-nationally. Many more desire the option to do so, whenever they want. To them their British identity is important, but they are also distinctly enjoying the added benefit of a broader worldview. It is of little surprise how many Brits are now considering getting alternative EU passports. And an important part of the battle against Brexit will be individuals that legally challenge any attempts by a British government to take away their European Citizenship.

The European Union has it greatest achievement in enabling people to be more than just British, more than just German, French, Spanish or Greek. This is the left, truly anti-nationalist essence of the European Project. And it should be an absolute priority for all on the left to defend European Citizenship against those caught up in nationalist worldviews, whether from the right or from the left.

The EU has, without a doubt, led to an increase in nationalist sentiments. This is partly because of the ways the EU is set up, where the role of national governments remains too important in decision making, tempting most of them to play nationalist cards. Those living in the post-nationalist reality need to join forces and defend the achievement enshrined in our joint status as European citizens – a status that can only be a stepping stone to overcome nationalism everywhere.

For Corbyn/McDonnell the task is to listen to the voices of those that support them mostly: young people desiring to get rid of the nasty and backward right wing nationalism and racism expressed in UKIP and sections of the Conservative Party. They need to use the momentum among progressive forces in the UK, cleanse themselves of their residual British nationalism and join the broad support for a post-nationalist reality.

If they are not up to this task, there is no doubt that they need to step aside!