It is high time for us to organise not for, and not with, but as migrants.

There is nothing new about migration. People have always been on the move, for work, for love, for seeking better lives and in many cases – because home had become ‘the mouth of a shark’ as Banksy has put it. 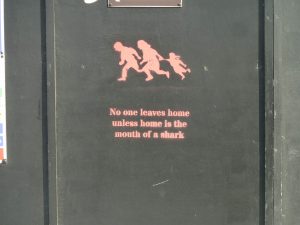 Today 250 Million of the world inhabitants permantly live in a country that they were not born in. If migrants were to form their own country, it would be the 5th most populous in the world. Many more people call several places home, and regularly move between them. The last few decades have seen a large increase of these figures, as easier transport and media have spurred global connectivity.

For quite some time, politicians have encouraged such connectivity under the banner of globalisation. There has been the consistent talk of the ‘global village’ in which we were living. At least two generations of children have been brought up to think of themselves as ‘citizens of the world’ in many places of the world.

Real-existing border and economic regimes have always contradicted such idealist claims. Elites may have argued for increased connectivity and the economic benefit it brings, but it is migrants who did the work: taking the alienating, expensive, laborious and often dangerous journeys that would allow them to benefit from and become part of globalisation.

Today significant parts of the global political leadership openly renounce the trajectory towards more open borders. Both the new UK and US government pursue populist platforms that advocate the re-nationalisation of politics and economics, claiming to have democratic mandates to do so.

There is nothing new about migration, but unfortunately there is nothing new about anti-migrant sentiments either. Many people are afraid of what is strange and what brings change. The vast majority of Trump and Leave voters were motivated less by economics than by what US scholars refer to ‘cultural backlash’, a rejection of the perceived cultural hegemony of liberal and cosmopolitan values. Research on voter preferences in both US elections and in the EU referendum show that anti-migrant sentiments are highly correlated to a specific set of policy preferences, including the rejection of ecological agendas (and the denial of climate change), gay rights, same-sex marriages, and feminism, among others.

The populist right combines those issues via the conspiracy theory of  ‘Cultural Marxism’. UKIP’s leader and Stoke-on-Trent by-election candidate Paul Nuttall regularly evokes the term to describe what he thinks is wrong with the contemporary world. Quite extensive reflections on ‘Cultural Marxism’ can also be found in the writings of the Norwegian right-wing mass murderer Anders Breivik.

Data on voter preferences shows that such views also strongly correlate with age. ‘Remain’ had a significant majority amongst Britons under the age of 45 and Hillary Clinton was the preferred candidate for US voters under 45. Much of the ‘cultural backlash’ may thus be a matter of generation: statistically speaking, the older we are, the more hostile we seem to be towards progress and change.

When this generational conflict plays out in aging societies, older, more conservative people have increasing political influence. But aging societies need migrants to stabilize their social security systems, to make up for relatively low birth rates and higher life expectancy. And thus a bitter paradox emerges: As societies get older, they need more migrants but they are also more likely to reject immigration.

Theresa May’s political conviction and strategy converge in her anti-migrant politics and British nationalism, expressing and successfully playing to the ‘cultural backlash’ ideology, During her tenure in the home office May re-designed immigration rules to make entry into the UK all but impossible for ever larger groups of prospective immigrants, students and refugees. She happily ignored both the interest of key UK industries like the Higher Education Sector and basic human decency. In summer 2014 May openly posited that drowning refugees must not be saved for this would encourage more to take the journey. In October 2016, as new Prime Minister carried into office on the back of Brexit, she issued what is likely to be remembered as the defining verse of her rule: ‘A Citizen of The World is a Citizen of Nowhere’.

Slogans perform policy. May effectively threatened to strip to ‘bare life’ a vast array of mobile folks, from bankers to undocumented migrants. In Germany, with its history of making people ‘citizens of nowhere’, such a statement would likely have caused a career ending scandal for any mainstream politician.

There is nothing new about anti-migrant sentiments, and for the moment the ‘cultural backlash’ seems to have the upper hand. But today migrants are more and stronger than ever in human history. This weekend migrants managed again to break through the fences of Ceuta, reaching EU territory in Northern Africa, while 160000 people marched through Barcelona demanding from the Spanish government to open the borders for refugees.

Today migrants across the UK take part in 1daywithus, highlighting their contribution, confronting xenophobia and resisting to be made ‘citizens of nowhere’.

We need migration, not just to maintain social security systems, but to remain forward looking, positive and open societies. It is high time for progressives to organise not for, and not with, but as migrants, as proud citizens of the world.